on November 21, 2018
Ronaldinho is a Brazilian footballer considered to be one of the best players of his generation. A player regarded for his technique, tricks, overhead kicks, and dribbling, he was a member of Brazil's 2002 World Cup winning team. Playing in his very first World Cup, in 2002, he scored the game-winning goal in a quarter-final victory over England. Gaucho is one of the few Footballers who could entertain and at the same time deliver great performances. 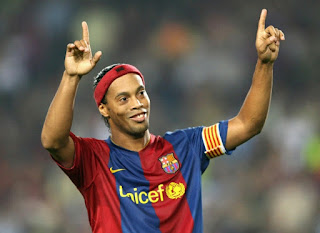 This is what they said about him.

"I've worked with some great players in my time and all at a very interesting period in their careers, nineteen to twenty years old. But, with due respect to the others, Ronaldinho was a cut above the rest." - Celso Roth

"I learned a lot from Ronaldinho. Football is a tactical game and you sometimes have to be serious. But he taught me to always do it with a smile and have fun. I spent hours watching his clips on youtube." - Eden Hazard

"There was a period in Ronaldinho's time at Barcelona where he was almost unplayable. Effortless, relaxed, always with a smile on his face, he's a genius with the ball. I love Brazilian football and he is one of the best ever players from that country." - David Beckham

"I played against him when he first came to Europe to play for Paris Saint Germain in 2001 and even then you could tell he would one day become the best player in the world. He has unbelievable skill and so many tricks in his repertoire." - Laurent Blanc

" [ . . . ] sometimes he did things that I never saw anyone else do. When we'd be winning the game, we'd start to enjoy ourselves and he'd bring it all out." - Deco

"I learned a lot from Ronaldinho and Robinho. Football is a tactical game and you sometimes have to be serious. But they taught me to always do it with a smile and have fun. I spent hours watching their clips on youtube." - Eden Hazard

"He is one of the greatest players I have ever seen." - Lionel Messi

"He transmits a lot of joy and pleasure playing the game, and he has individual skills that are of such a high level that everybody in the world adores him." - Frank Rijkaard

"For skills and tricks, Ronaldinho was the best player I've played with." - Edgar Davids

"Ronaldinho is a champion. I hope he continues in this way because he is a great, and you see that he has a great desire to do well." - Kaka

"Magic feet, but was not just about tricks – he created and scored the goals to match his ability." - Roberto Carlos

"Ronaldinho was virtually unstoppable at his best, as a forward or a playmaker." - Sergio Ramos

"Ronaldinho is total class – a very, very great player. He is quick, powerful, and has extraordinary technical qualities. He is a dribbler but is also a player who can make the play for his teammates. He's not really a No.10, a true organizer. He's more a second attacker who can score goals and has the vision to make them." - Zinedine Zidane

"For years we didn't win anything at Barcelona, then Ronaldinho arrived. He's the most important player in our history." - Carles Puyol.