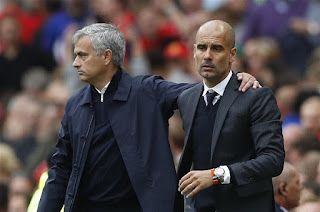 When it comes to Manchester derbies at the Etihad, United are usually the favorites.
The Citizens have spent the last few years getting better and better while the Red Devils have largely stagnated. It hasn't stopped them picking up results in the blue half of the city though.
Both teams were impressive in the mid week with City getting a 6-0 win over Shaktar Donetsk while United made a surprise come against Juventus to win 2-1 in the champions league.
Important Stats
•United have a better record than City overall, winning 73 of the 176 meetings, however City have won six of the last 12 encounters, drawing two and losing four. Man City wins: 51 Draws: 52 Man United wins: 73
•United have won four of the last eight meetings, while City have won only twice during the same period. The most recent meeting was a thrilling win for United at the Etihad in April.
•City's last Premier league defeat at home came against Man United. Since then, they have won eight of their nine games at home in the competition, including all six this season.
•In the Premier League, only Wayne Rooney has scored more Manchester derby goals than Aguero's seven. However, the Argentine hasn't scored in his last three Premier League games against United and he hasn't been on the winning side in his last five.
Team News
There is a chance that Romelu Lukaku could return from his recent lay-off. The Belgian striker did not make the trip to Turin but will hope to be involved in the Etihad Stadium clash, a key fixture ahead of another international break.
City will be without Kevin De Bruyne after he suffered another knee problem, with Nicolas Otamendi and Ilkay Gundogan, a scorer in this fixture last term, racing to be fit in time to feature. Claudio Bravo and Eliaquim Mangala are long-term absentees.
Predicted Man City XI v Man Utd: Ederson; Walker, Stones, Laporte, Mendy; Fernandinho, Bernardo Silva, David Silva; Mahrez, Sterling, Aguero.
Predicted Man Utd XI v Man City: De Gea; Young, Smalling, Lindelof, Shaw; Fellaini, Matic, Pogba; Mata, Martial, Rashford.
City vs United: Betting tips
1. Over 2.5
2. BTTS
3. Man city to win